The true outcome of this 5 day experience is focused on the development of life-skills such as confidence, motivation, social skills, work ethic, self respect and respect for others. We can add in Royal Yachting Association certification for Competent Crew and Watch Leader for an additional cost at your request. Prices from €550 for 5 day course. Call +353 85 866 7787 or email info@dublinundersail.com

to find out more

Bringing young people Together at sea

The core focus of Brian Ború is youth development under sail. This will involve bringing young people to sea on 5 consecutive day voyages, living aboard as members of the “Trainee Crew” and learning to operate every aspect of the vessel. It is an incredibly effective educational tool and our vessel is the ideal environment.
We align with and support the mission of the charity Sail Training Ireland, and we are committed to making it available to all young people regardless of their means, backgrounds or abilities. Our sail training voyages can be offered at a very low rate and then co-funded through Sail Training Ireland’s bursary schemes so that no young person is denied this life changing opportunity. Our Sail Training 5 Day experiences start every Monday throughout the summer and can work from harbours around Ireland. Call us on 085 866 7787 or email info@dublinundersail.com to discuss your requirements. 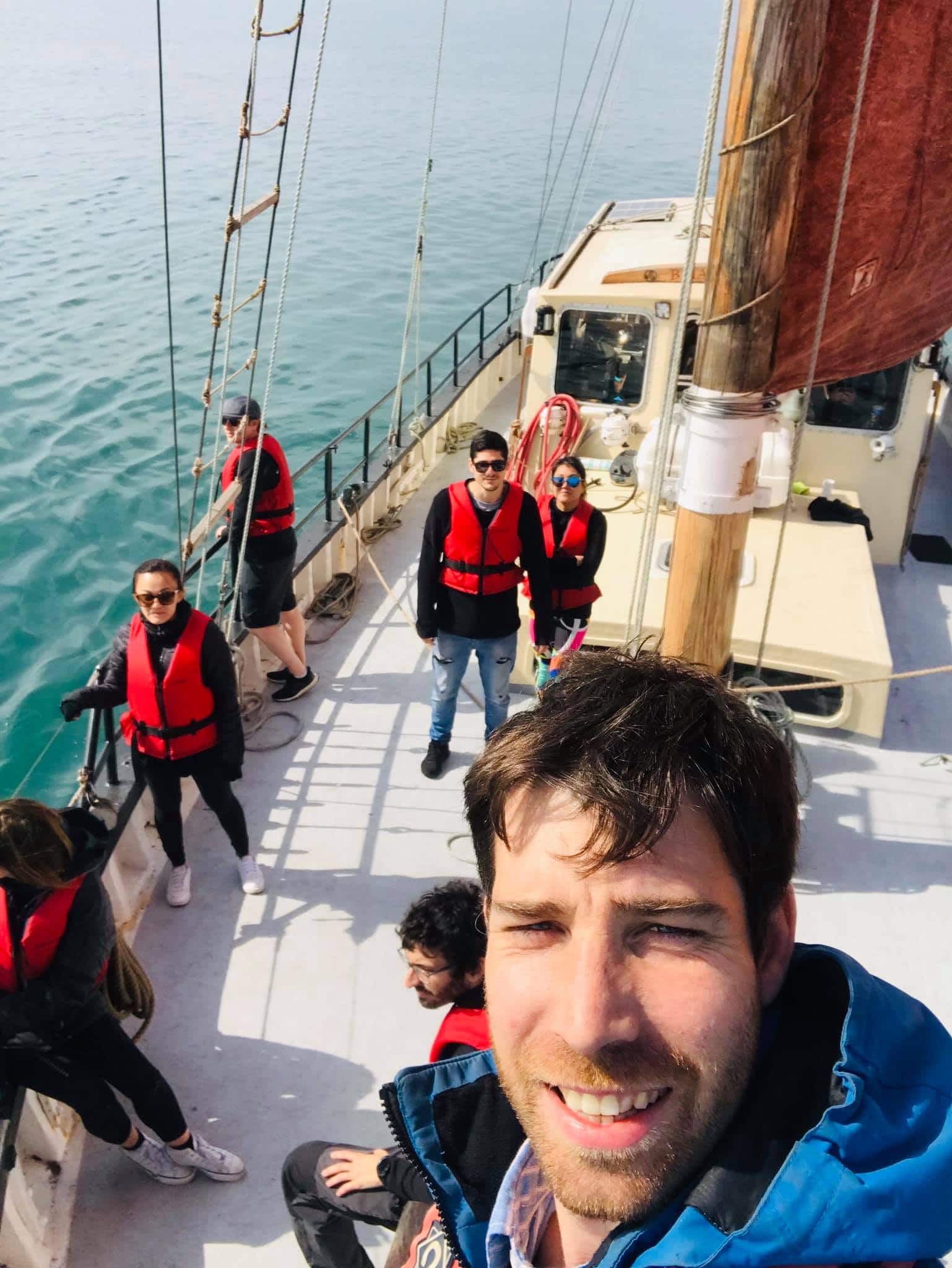 DO YOU WORK WITH YOUNG PEOPLE?

If you are involved in working with young people either in youth work or in voluntary organisations such as scouts, guides, cubs, brownies or Foróige or maybe you work with young people through sports?  To arrange a day-sail or 5 day voyage please contact us directly at: info@dublinundersail.com, 085 866 7787
Or visit Sail Training Ireland for more information.

WHAT IS SAIL TRAINING?

Sail Training involves young people undertaking voyages on the Brian Ború, effectively as part of the working crew. Sail training must not be confused with “learning to sail”, an activity which can be undertaken by any sailing club. The operation of a sail training vessel involves a vast range of activities and tasks not found in any other activity. This includes activities such as;

My Time Aboard The Brian Ború
By Lara Dwyer
As someone who did not grow up around boats, nor has large family ties to yachts, yacht clubs, or marinas, or frankly any seamanship history at all,  working and training aboard The Brian Ború is something I never expected to do. I sail a mirror, one I reconstructed with my friends over lockdown, and have only started becoming really invested in sailing in the past year. The week working and training on The Brian Ború was an unparalleled experience for me and I could not have enjoyed it more. The Brian Ború is a vessel of breathtaking beauty, in its historically picturesque facade. I personally think it looks like a pirate ship. The boat was kept sane and afloat due solely to the really wonderful crew – Phil, the bosan, whose unique style and energy added greatly to charm of the week. Hugh, the first mate and engineer, who was frankly delighted to have so many slaves *cough cough* crewmembers aboard. And finally Peter, the skipper, from whom
I’ve learned so much, not only about sailing but about leadership and teamwork and confidence onboard a vessel of such size.
One thing that really struck me about The Brian Ború and my time training on board was how much I resonated with the ethos that Peter, Hugh and Phil established right from the onset. It was a really welcoming warm environment, where the main objective was to have a good time. I was initially trepidatious about the week long course, being relatively new to the sailing world, but there was no hierarchy, no sense of superiority from those who were more
experienced. Everyone was there to learn about sailing “organically”, the way our ancestors did. And I just thought it was brilliant. Each morning we were briefed on what the day was going to entail. We were assigned roles, alternating daily, which included Watch Leader and Galley Crew. I enjoyed being watch leader, partly because I was given the authority to bark orders and not do so much hauling of halyards, but also because it allowed me to gain a sense of confidence I once lacked, instilling in me vital leadership skills when working with a team. Skills which are applicable to any path in life. Being part of the Galley crew, however, was not a role I adored nor was I particularly talented at. I have a newfound respect for anyone who has to make a hot meal for a significant number of people aboard a ship. It was difficult, and that was on a calm day. I don’t want to think about what it would have been like trying to whip up some fajitas in such cramped quarters during the middle of a storm. Nonetheless, the experience was insightful, if a bit stressful. Working on deck was strenuous and required concentration but I genuinely just had such a good time. On the first day, the sheer number of ropes on deck was overwhelming, but I quickly learned the function of all of them and by the end of the course, all of us trainees were wonderfully efficient in raising the sails, preparing to jibe, lowering fenders, berthing, throwing and making up lines, anchoring and cleaning the deck. We each got to helm, which was really cool. Under the angelic guidance of Peter, I somehow maneuvered the boat to dock in Crosshaven, and I have to say I felt proud. Jumping off the anchored boat and having a water-fight on deck is a memory I will look back on fondly. The five days I spent onboard The Brian Ború were by far the best spent days of my Transition Year. I met many new wonderful people and had such a fantastic time out on the water. I feel lucky that I trained onboard such a unique vessel and I cannot recommend the experience more highly to anyone who loves the outdoors, the water and a bit of adventure!